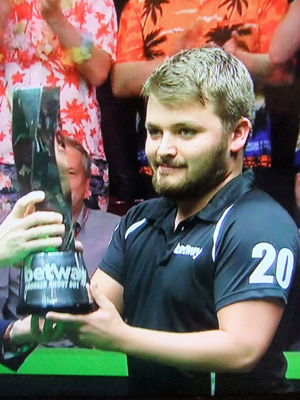 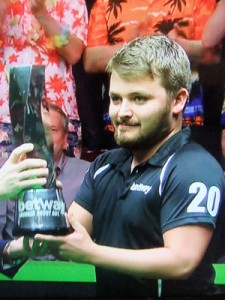 Congratulations to Michael White who has tonight defeated Xiao Guodong to win his first professional title and the top prize of £32,000 at the Shoot Out in Blackpool.

It was a dramatic final, which saw Michael earn an early advantage, before what looked like a decisive fluke for Xiao gave his opponent a chance to counter. Having moved into the lead however, Xiao missed a pressure ball and allowed White to return to the table and pot the winning black with just six minutes remaining on the clock.

Love or hate the event, it was a great last eight line-up, with seven of the quarter-finalists being ranked outside of the top 16 and for me, always nice to see a new tournament winner, particularly Michael White who has been one of the players knocking on the door for a while now.

Regular readers will know that the Shoot Out is not my favourite event and therefore I watched little this week aside from the final, but it is harmless enough and a good opportunity for players such as Michael and Xiao to earn some good money away from the other more important events on the calendar.

Next stop, Mumbai for the Indian Open next week.