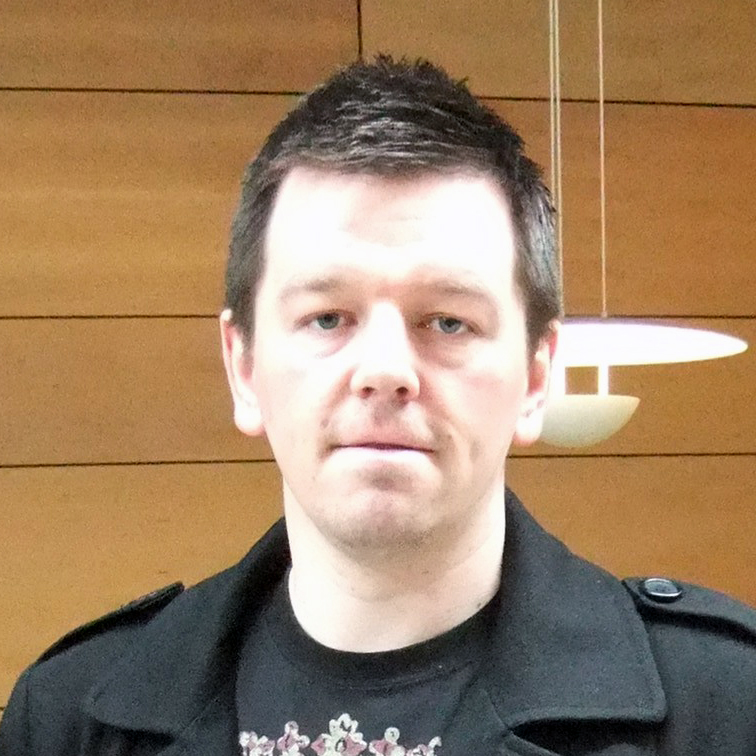 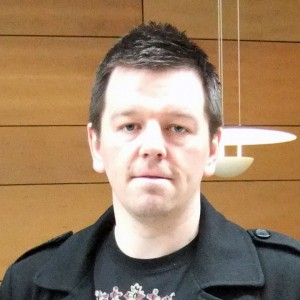 During his first spell on the main tour back in 1997/8, Simon impressively managed to qualify for the final stages of the World Championship at Sheffield with a 10-9 victory against Gary Wilkinson at the last 48 stage. Although he did lose his first round match 10-6 to six-times champion Steve Davis at the Crucible, he had done enough to retain his place on the tour with a ranking of 119.

During the following season however he could not build on this run and a couple of years later found himself off the tour, though he was able to bounce back at the first attempt and limit his absence to just a single season. 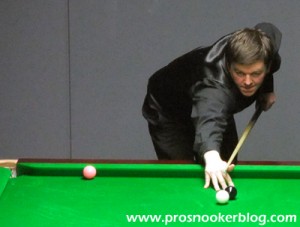 Simon in action at the 2011 World Championship qualifiers

The next time that Simon would reach the last 32 stage of a ranking event would be in 2004 at the European Open as he began to string together enough good results to maintain a place on the tour for five straight years. Having achieved his highest ranking of 63 in 2005/6 however, he slipped to 68th the following season before again being relegated from the main tour the year after that.

As a result he found himself back at Prestatyn in 2007/8 for another crack at getting back onto the tour via the PIOS. He started off well, winning the first event with a 6-3 victory over Gary Wilkinson and with another final to his name in the sixth event, did enough to end the season third in the rankings.

Having secured his return to the main tour for 2008/9, Simon was to go on arguably the best run of his career at the 2008 Grand Prix tournament. There he beat Liu Chuang, Andy Hicks and Mike Dunn to earn a tie with 2000 and 2003 world champion Mark Williams in the fourth qualifying round. He started the match well and following a tense deciding frame, defeated the Welshman 5-4 to reach the last 32 of an event for just the third time.

Simon in action at the 2009 Paul Hunter English Open

This was surely the biggest single win of Simon’s career and though he lost out in Aberdeen to 2002 world champion Peter Ebdon, the points gained from this result and those from his season-ending run to the third qualifying round of the World Championship qualifiers were enough to see him retain his place on the tour via the one-year rankings.

The following season proved to be much the same for Simon as he won his opening match in four of the six tournaments staged, reaching the final qualifying round of the Shanghai Masters before losing out to Barry Hawkins.

Although his second round defeat to Robert Milkins at the season-ending World Championship meant that he was not able to move into the top 64 on the two year list, he was at least about to retain his main tour place, again via the one-year list.

With the introduction of the Players Tour Championship in 2010/11, players had to start the season well but unfortunately Simon could not do so, failing to win a match in the first six events played which saw him drop to 89th in the rankings following the first mid-season revision.

Better was to come as the season progressed, two wins coming at the World Open, UK Championship and German Masters tournaments whilst he also won his opening World Championship qualifier against Thai player Noppon Saengkham. 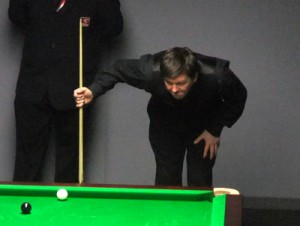 Simon at the 2011 World Championship qualifiers

Unfortunately for Simon however, his 10-6 defeat to Jamie Jones in the second round during which he lost all seven frames of the evening session brought an end to his season. Coupled with his poor performances during the PTC events and the loss of the ranking points earned from his terrific run to the last 32 of the Grand Prix in 2008, this saw him relegated from the professional tour at the end of the season.

He return was though to prove swift as he defeated Fraser Patrick, Mohammed Raoof, Stuart Carrington, Joel Walker and Lee Walker during the second event of the new Q School to ensure that he would remain on the main tour for 2011/12.

Simon was to experience a mixed start to the 2011/12 season as he struggled for victories during the full-ranking event qualifiers staged, in fact losing his opener in the first four tournaments held which left him struggling at the foot of the rankings.

Despite this, his form during the PTC events was generally solid, third round runs at PTC1 and PTC3 combined with a last-gasp run to the last 16 at PTC11 proving his best results and at the time of writing, enough to ensure that he will retain his place on the main tour for the 2012/12 season.

Unfortunately, Simon was to suffer a fracture to his back following a car accident on his way back to Bradford and was not to compete again on the tour for the remainder of the season.

The first half of the 2012/13 season was to prove largely unremarkable for Simon, with the exception of a terrific 4-3 victory against reigning world champion Ronnie O’Sullivan, in the opening round of the UKPTC3 event in Gloucester. 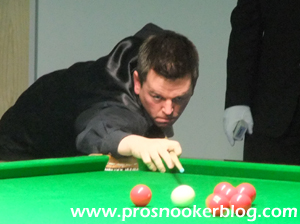 Simon was also to finish 2012 on a real high, as he defeated Pankaj Advani, Peter Lines, Gerard Greene and Ken Doherty to qualify for the venue stages of the Haikou World Open, where he was to lose 5-2 against wildcard Lu Haotian.

Indeed Simon was not to win another match on the tour during 2012/13, defeat at the opening round of the 2013 World Championship qualifiers seeing him end the season ranked 85th. With Ronnie O’Sullivan’s victory at the Crucible however, Simon will go down in the history books as the only man to defeat the five-time world champion during the 2012/13 season.

Simon was to enter just seven events during the first half of 2013/14, his best result being a run to the final qualifying round of the Australian Goldfields Open, where he was to find himself whitewashed by former world champion Ken Doherty.

Following the Shanghai Masters qualifiers in August, Simon did not enter another event until the 2013 UK Championship, where he lost out 6-4 to Scotland’s Jamie Burnett in the opening round.

That tournament would prove to be Simon’s last of the season, as he finished ranked 99th and relegated from the tour.