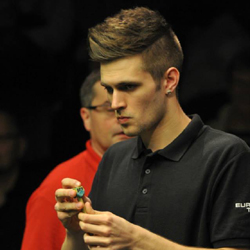 Hailing from Skellingthorpe in Lincolnshire, Steven began playing snooker as early as five years old, ever since he picked up a pool cue while on holiday and he has since steadily risen through the game’s amateur ranks.

He perhaps first came to attention when he qualified for the final eight of Ronnie O’Sullivan’s Rileys Future Stars event, eventually won by Joel Walker in 2010, while he also earned the opportunity to face Mark Selby in a one-off match after winning the Under-17 Lincoln and District Billiards and Snooker Association title in 2009.

During the 2013/14 season, Steven entered a number of European Tour events, notably pushing Kurt Maflin to a deciding frame at the Paul Hunter Classic event in August 2013.

Steven also enjoyed success during the series’ amateur cup events, winning in Antwerp to qualify for the EBSA play-offs, which would be staged in Sheffield alongside the professional World Championship qualifiers.

Once there, the 18-year-old defeated Martin Ball and the much-fancied Mitchell Travis, to earn a two-year tour card for the first time, beginning in 2014/15.

On the face of it, Steven was to struggle during the 2014/15 season as he won just three matches at full ranking events, two coming in the Shanghai Masters qualifiers in August.

He did though impress towards the end of the season as first he took Shaun Murphy to a deciding frame at the Welsh Open, before pushing Indian Open champion Michael White to a 10-8 scoreline in the opening round of the World Championship, earning a number of plaudits in the process.