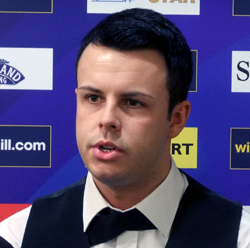 Having failed to make it through snooker’s Q School in 2011 and 2012, Gateshead’s John Astley earned his professional place for the 2013/14 season, courtesy of a series of consistent performances during the PTC events staged during 2012/13, as an amateur.

Defeating the likes of Jamie Burnett, Joe Walker and Passakorn Suwannawat during the course of the season, John reached the last 32 stage of three PTC events, enough to see him finish as the fourth highest ranked amateur on the 2012/13 PTC Order of Merit.

On tour for the first time, John was to successfully qualify for his first venue at the Wuxi Classic with a 5-2 victory against Mike Dunn, but otherwise was to find wins hard to come by during the first half of the season.

He was though to record a notable success at the 2013 UK Championship, defeating former world champion Ken Doherty 6-5 in a thriller at the Barbican Centre in York, before losing out 6-1 to Stuart Carrington in the following round.

Although John was able to defeat Robbie Williams 5-2 to qualify for the venue stages of the China Open, where he would lose 5-1 to eventual champion Ding Junhui, the second half of the season would continue to be difficult for Astley.

With just one other win coming at the season-ending World Championship, Astley would end his maiden professional season ranked 98th.

The 2014/15 season was to prove difficult for John as he won just five matches in all competitions, meaning that he would end the season ranked 86th and therefore be relegated from the main tour.