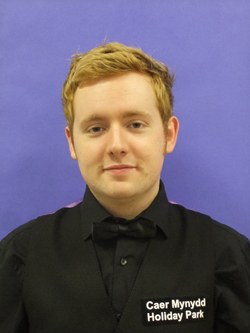 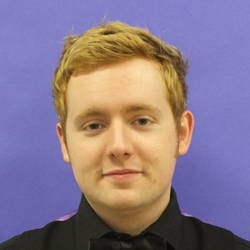 Ben Woollaston first graduated to the tour as a 17-year-old for the 2004/5 season but failed to retain his place and spent the following season competing in the PIOS at Prestatyn. Though he could only reach one semi-final as he finished up in 21st place, he nevertheless managed to regain a spot on the main tour for 2006/7 following victory in the EBSA European under-19’s Championship in 2006.

Though he again struggled for results, he had at least done enough to impress the governing body as he was awarded one of the invitational spots available for 2007/8. Despite making it through to the last 32 of the Welsh Open before losing out to Stephen Hendry however, this time there was to be no reprieve and he was to lose his tour place at the end of the season. 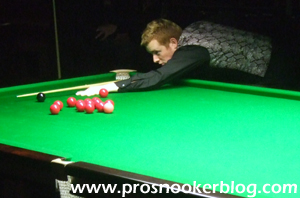 Ben did not manage to win an event during his 2008/9 PIOS campaign but importantly he was reasonably consistent, reaching a quarter-final in event five where he lost out to eventual winner Chris Norbury, before reaching the final of the very last event which he lost 6-5 to Joe Jogia. Despite this defeat however he had already done enough to be sure of a return to the top flight for 2009/10.

Ben’s return to the main tour in 2009/10 was solid if not spectacular, his best run being to the third round of the UK Championship where he lost out 9-7 to Jimmy Michie. This combined with three other first round wins were enough to see him just retain his main tour place for the following season as he finished 8th on the one-year list of players outside of the top 64.

The early stages of the 2010/11 season saw Ben continue to struggle for consistency but strong performances during both the World Open and a number of the PTC events did at least keep him in contention to retain his place on the main tour for 2011/12. 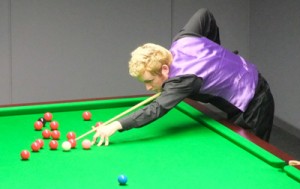 Ben during the 2011 World Championship qualifiers

Though he could not make it through to a venue, importantly Ben was to win both his opening matches at the UK Championship and the World Championship qualifiers to gain important ranking points. The man from Leicester was also able to retain his place on the main tour for 2011/12 following his early-season PTC results.

Following his marriage to wife Tatiana in June 2011, Ben embarked upon an excellent run at the Australian Open qualifiers, defeating Adam Duffy, Ian McCulloch and Jamie Jones to reach the final qualifying round. Though he lost out there to China’s Liang Wenbo, he carried his good form through to the PTC2 event where he recorded an impressive win against Martin Gould before falling to Rory McLeod.

The best however was to come at the following event, the PTC3 in Sheffield where he defeated Rod Lawler, Kurt Maflin, Andrew Higginson, Ken Doherty, Alan McManus, Anthony McGill and finally former world champion Graeme Dott in the final (click here to read my report), to win his first professional title. His toughest match was to be his quarter-final against Alan McManus in which he trailed 2-0 early on before coming back to win 4-3. 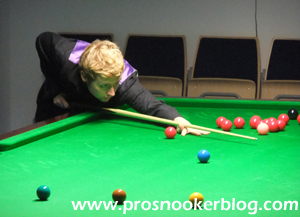 Ben’s success at PTC3 was enough to see him up into the top 64 of the world rankings for the first time and with further consistent performances to follow in the remaining PTC events, as well as a run to the final qualifying round of the UK Championship, he was well-placed to move into the top 48 during the second half of the season.

Though he would not quite make it that far, he was to qualify for the final stages of the China Open with victories against Tian Pengfei, Nigel Bond and Ryan Day, before losing to Ding Junhui in Beijing in a decider, having previously led 4-0.

Ben’s season was to conclude at the World Championship qualifiers where having defeated Daniel Wells and Steve Davis to make it to the final qualifying round for the first time, he then lost out 10-3 to Dominic Dale.

Following his strong campaign previously, Ben was to struggle at the full-ranking events during the early stages of the 2012/13 season, losing his opening matches at the season’s first four tournaments. 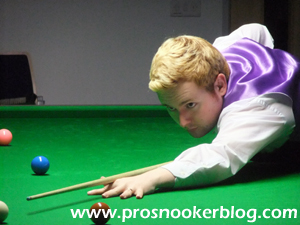 Ben in action during the 2012 UKPTC1 event

He was however able to maintain his position in the rankings courtesy of consistently strong results in the PTC events, where Ben was able to reach the quarter-finals of events on four separate occasions, while also reaching the last 16 of a further two.

During the second half of the season, Ben was able to reach the quarter-finals of a full-ranking event for the first time at the PTC Grand Finals with victories against Mark Williams and Joe Perry, before he lost out to Kurt Maflin.

He followed this up by then qualifying to play at the Crucible for the first time in his career, defeating Thepchaiya Un-Nooh and Ryan Day at the EIS, before losing 10-4 against two-time finalist Ali Carter. His performances were strong enough however to see him finish the season at a career-high ranking of 33.

Ben’s strongest result of the 2013/14 season was to come early at the Wuxi Classic, where he defeated Dylan Mitchell, Chen Zhe and Joel Walker to reach the last 16 stage, before losing out to Cao Yupeng, an opponent who would record three wins against him early in the campaign.

Otherwise however it was to be a difficult campaign, opening round defeats at the UK and World Championship events hurting him on the new prize-money based ranking list, although he was able to record an impressive win from 3-0 down against Ding Junhui at the Players Championship Grand Finals.

Arguably his strongest form was to come during the European Tour events, a quarter-final run at the ET5 event, subsequently bettered by a semi-final run at the ET7 event in Antwerp in November, ended only by reigning world champion Ronnie O’Sullivan.

Ben finished the season ranked even places down from the season start in 40th position.

The stand-out event of Ben’s 2014/15 season was to come at the Welsh Open in Cardiff, as he defeated Thanawat Tirapongpaiboon, Mark Davis, Mark Allen, Ali Carter, Gary Wilson and Mark Williams to reach the final of a full-ranking event for the first time in his career. 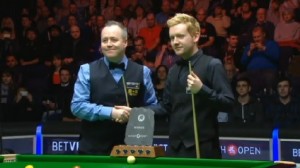 In the final he came up against childhood hero John Higgins, but could not reproduce the form that had taken him that far and fell to a 9-3 defeat in Cardiff. His run was though enough to see him climb to a career-high 26th in the rankings, although following defeat to Robin Hull at the World Championship qualifiers he was to drop to 32nd by the end of the season.

Away from the ranking circuit, he was also able to reach the quarter-finals of the Shoot Out in Blackpool, as well as the semi-finals of the Championship League winners group, having defeated Peter Ebdon to win the sixth regular group.