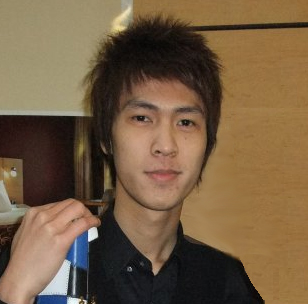 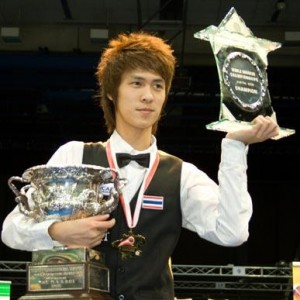 Thepchaiya first came to the attention of the snooker world in 2002 when he won the national students championship, but it was not to be until 2008/9 that he would really begin to deliver on his potential.

His first big victory was to come in the Korat Cup in July 2008 as he swept aside main tour professional Supoj Saenla in the semi-finals, aided by a seven minute break of 142, before he defeated former world number three James Wattana in the final by a 5-2 scoreline. Thepchaiya stated after the event:

“This easily is the greatest victory of my career, not because it is the first time that I have won a ranking tournament, but because of the way I won it.

“I am sure not many people would have given me a chance of winning against a player of Phi Tong’s [James Wattana’s] calibre and stature, but I am glad that I defied the odds and did better than my own expectations.”

As it was to turn out however, better was soon to come as he entered the 2008 IBSF World Amateur Championship, staged in Austria late that year. Having come through his qualifying group in second place, dropping just five frames during his seven matches played, he then managed to beat Wattana again in the last 16 before seeing off other more experienced players such as Yu Delu, Xiao Guodong and Colm Gilcreest to take the title. To read my full match report on the final click here. 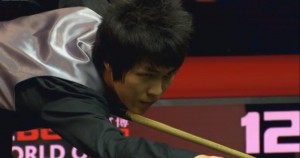 As well as being an important title in its own right, this ensured that Thepchaiya would be able to compete on the professional circuit in 2009/10 and in anticipation of this, he was invited to come over to the UK and participate in the final three events of the PIOS season.

Although in his first event he managed to win just one match (albeit against former professional Ben Woollaston), his second was to be brilliant as he managed to go all the way and take the event title with a 6-3 final victory over Lee Page. This was slightly controversial as some onlookers felt it unfair that he could participate at such a late stage despite already having a main tour place secured, but this was not his fault and took nothing away from his performances.

Thepchaiya’s season got off to a slow start at Pontin’s when he lost out in a deciding frame against Xiao Guodong in qualifying for the Shanghai Masters. His first professional win however came against countryman Atthasit Mahitthi at the subsequent Grand Prix qualifiers, before he had an outstanding run to the final qualifying round of the UK Championship qualifiers, defeating Chris Norbury, Rod Lawler and Alan McManus before losing out to Gerard Greene.

From here however his fortunes were to dip as he won just one match during the season’s remaining three events. The biggest disappointment was to come during his opening World Championship match against Matt Selt when having led 6-3 at the end of the first session, he lost the next five frames and eventually the match, 10-8.

This meant that as a result Thepchaiya was to lose his place on the main tour after just a single season. 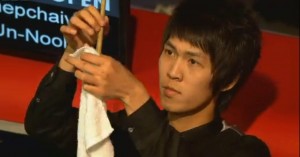 Having been relegated from the main tour the previous season, Thepchaiya nevertheless managed to make a mark during 2010/11 as he became the only amateur player to qualify for the televised stages of the World Open tournament in Glasgow where he lost out 3-1 to Ali Carter.

Thepchaiya made an excellent return to the main tour in 2012/13, his best result being a run to the final qualifying round of the 2012 UK Championship, whilst he also won at least two matches in four other full-ranking events.

His performances during the PTC events were also to prove consistent as he reached the last 16 of three separate tournaments, while he ended the year on a high by successfully qualifying for the venue stages of the German Masters and a clash with world number one Mark Selby.

Away from the table, there was to be a WPBSA investigation into his match against Steve Davis at the UKPTC3 event in Gloucester, however no further action was to be taken by the governing body.

In 2013, Thepchaiya’s best form was to come at the season-ending World Championship qualifiers, where he defeated Scott Donaldson and Gerard Greene to reach the last 64, before losing 10-3 to Leicester’s Ben Woollaston.

Thechaiya was to continue his progress during the 2013/14 season, a last 16 run at the Haikou World Open representing the strongest result of his career to date, while he also reached the last 32 of both the International Championship and the China Open.

The 2014/15 season saw Thepchaiya break new ground on the professional circuit as he reached his first professional final at the Xuzhou Open in China, defeating former world champion Mark Williams along the way before losing 4-1 to Joe Perry.

He was also able to progress beyond the last 16 of a full-ranking event for the first time as he recorded a surprise victory against defending champion Ding Junhui at the Indian Open, before adding the scalps of Luca Brecel, Jamie Jones and Mark Davis to reach the semi-finals.

Although he was to lose 4-3 against Ricky Walden in Mumbai, the £13,500 earned from his last four run was enough to see him climb to a career-high ranking of 47th, dropping a couple of places to 49th at the end of the season.