From the start of the 2014/15 season, the snooker world rankings will be be determined by a prize money list for the first time, replacing the previous points system that has been in operation in some form since the 1976/77 season.

All prize money earned from events carrying ranking event status will count towards a player’s official world ranking. This will not include money from invitational events such as the Masters, World Grand Prix, Champion of Champions or Championship League events.

For the avoidance of doubt, money earned from high break prizes or maximum break prizes will also not count towards a player’s world ranking under the prize money list.

For events counting from the 2013/14 season, where prize money is won without a player winning a match in a tournament, eg at events in operation under the ‘tiered’ system such as the World Championship, only 50% of that prize money will count towards the prize money ranking list.

For events from the start of the 2014/15 season, where prize money is won without a player winning a match in a tournament, none of that prize money will count towards the prize money ranking list. 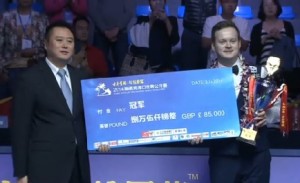 As has been the case since the start of the 2010/11 season, the rankings will run under a ‘rolling’ system, meaning that as points for the current season are added to the ranking list, points from two years previously will be replaced.

An important point to note however is that whilst the official rankings are updated after each completed event, the seedings for future events, which are ultimately what are most important for the player to know, are not.

Instead the seedings will be revised at SEVEN points times during the season, in addition to the end of season revision following the 2015 World Championship.

The mid-season revisions during 2014/15 will take place on the following dates:

In effect, this means that at any one time, there will be three separate lists of relevance for fans and players alike:

As a result, rather than having one table to cover the season, I have will a table leading up to each individual seedings revision, beginning with the the first in July 2014. The latest list will always be available here.

To demonstrate just who has the most to lose at each cut-off point I will also be presenting ‘points to defend’ tables, an example of which you can see here.

To access all of my rankings pages, please click here to return to the main rankings menu.