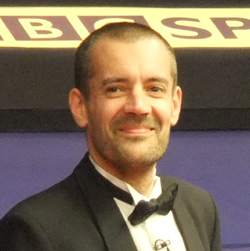 Belgium’s leading referee, Olivier Marteel has been a qualified referee since 1994, though it was not until 2006 at the Masters qualifying tournament when he was to make his professional debut.

He continued to referee at amateur level for a while, including the 2009 European Open final between Tony Drago and Roy Stolk, but has since gone on to officiate at the biggest venues in snooker, including the Crucible Theatre.

In the subsequent years Olivier has taken charge of several major finals, including at the 2015 World Grand Prix between Judd Trump and Ronnie O’Sullivan.

At the 2014 World Championship Olivier refereed at the one-table set-up stage for the first time in his career by taking charge of the match between Mark Selby and Neil Robertson.

A year later, the Belgian was then selected to referee his first Crucible final, following in the footsteps of Holland’s Jan Verhaas as the second man from continental Europe to officiate snooker’s biggest final.