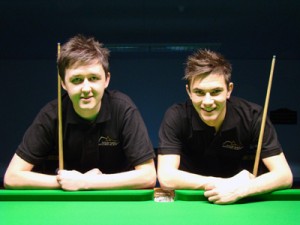 Two days into the new season and already there have been some intriguing stories to come out of the first PTC event as the frantic action has seen the field for tomorrow when the professionals enter the fray in round three. Click below for a few of the highlights from the weekend…

He might have failed to regain a place on the professional circuit via the Q School last month but veteran Mike Hallett has still got the game as he proved by edging two deciders today, first against Welsh youngster Duane Jones this morning and later against Gateshead prospect Ellitt Slessor. Mike’s reward for his efforts will be a tie against Ronnie O’Sullivan in what is a competitive fixture that I didn’t expect to see again!

Also through to a glamour tie in round three is Kyren Wilson who recorded good wins against fellow On Q player Jak Jones and then Ian Stark to book a shot at Stephen Hendry on Tuesday. On paper Hendry looks to be a big favourite but over seven frames in a cubicle against a player at home in that setting, I suspect the match will be could be far closer than some would anticipate. Will Hendry turn up in Sheffield ready to dig in as he will have to do or will he merely be there to show his face?

Elsewhere, Ben Harrison impressed again with victories against Brian Cox and then today Joel Walker, gaining revenge in the latter following their meeting during the Q School. Ben will now move into a tie with PSB interviewee Mark Joyce who will be looking to build on his Pink Ribbon success with another title here. 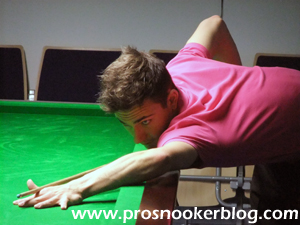 Having struggled during last season, Reanne Evans who this time is competing as an amateur, won her first PTC match with a 4-2 success against Christopher Keogan this morning. She could not repeat the feat later on in the day however as she lost out to Ian Glover by the same scoreline. Ian now moves on to a tie with Jack Lisowski on Monday morning.

The event was always going to be a tough one for Martin O’Donnell coming so close after the EBSA European Championship but as he arrived back in England at 1:45pm before making it to Sheffield at 4:45pm for a 5pm start against George Marter, it was a fantastic effort from him to win his opening match. Following defeat today against Ian Burns however, I should think that some well earned sleep will be in order ahead of the next PTC event!

Other stories? Andy Lee had a couple of good wins to earn a shot at Matthew Stevens, while the likes of Allan Taylor, Craig Steadman, Chen Zhe, Sean O’Sullivan, Zhang Anda, David Gray and Gary Wilson have also made it to the pro stage. Gareth Allen gave it his best but despite preparing in fine style with a spectacular burger, went down 4-0 to James Murdoch in the second round. 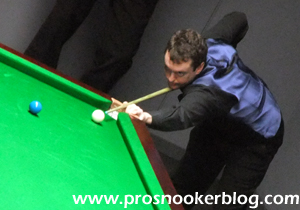 Joining them is a youngster that a few of you might not have heard of, but is a name to remember, Hampshire’s Shane Castle. Just 13 years of age, Shane today saw off Alex Taubman who is no mug to book a tie with Jamie Jones in the next round and it will be interesting to see how he gets on, not just in that match but during the next couple of seasons. I wasn’t able to see him play at the recent Pink Ribbon tournament but  by beating players such as professional Andrew Norman to reach the last 16 stage he is clearly a special talent.

Rounding things off, Robbie Williams edged out Sam Harvey 4-3 in a match that always looked like going to a decider but it was another disappointing showing from struggling former pro Mick Judge who went down 4-0 to Farakh Ajaib early in the day.