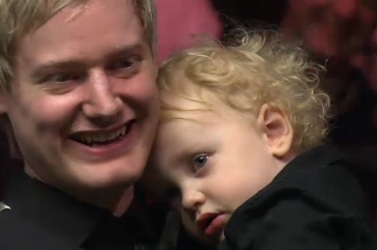 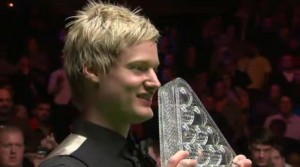 So while the final round of the 2013 China Open qualifiers is played out in Sheffield today, tomorrow sees the start of the year’s first major, as the 2013 Masters kicks off at the Alexandra Palace in London. Click below for my thoughts ahead of the tournament…

Set to take place at the ‘Ally Pally’ for the second time, the tournament that I still struggle to refer to as anything other than the ‘Wembley Masters’ will once again see the world’s top 16 meet in what remains the biggest invitational tournament in snooker.

From Kirk Stevens’ 147, to Mark Williams’ re-spotted black win against Stephen Hendry, to the late Paul Hunter’s hat-trick of comeback wins at the turn of the millennium, the Masters has provided more than its fair share of memorable moments in snooker over the years, since its inception back in 1975.

More recently, the last two winners have been Neil Robertson and Ding Junhui, who meet tomorrow in the curtain-raiser to this year’s tournament in 2013. Two players of the highest-quality, it is as difficult as ever to call a winner these days, but of the two I feel that Neil has looked the stronger over recent months and it is the Australian who has generally had the upper hand during their previous meetings, winning their last two meetings at full-ranking events.

Indeed Neil is a player that I fancy to do very well at the tournament this week, to the extent that I have backed him to become the first player to successfully defend the title since Paul Hunter back in 2002, in my predictions contest entry at the excellent snookerorg. 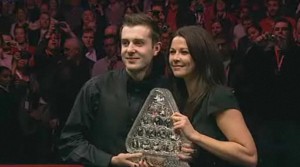 If Neil is not to win however, who else is likely to challenge? For me, the top four in the rankings currently are as close to a ‘big four’ as we have seen in snooker since the fabled ‘Hendry-O’Sullivan-Higgins-Williams’ bracket of the late 1990’s.

At the front of the queue is Mark Selby, who is currently snooker’s form man having captured the UK Championship and ET6 titles in recent weeks. With the effects of his neck injury now apparently now well behind him, the man who won this title twice at the old Wembley Arena, will be hoping to complete the hat-trick in 2013. He opens on Wednesday against Stuart Bingham, who himself has enjoyed a strong run of late, notably defeating Selby 6-0 in the Premier League, albeit it in very different circumstances to these.

Potentially awaiting Mark in the semi-finals will be former world number one Judd Trump, who was a semi-finalist at this event last season before losing to eventual winner Robertson. Despite his shock defeat to Mark Joyce at the UK Championship in York recently, Judd has probably been the most consistent player on the tour this season to date and will be looking to hit back against Barry Hawkins in London.

The final member of the top four is John Higgins, who like Judd suffered a surprisingly early exit in York, but remains one of the men to beat on the tour at present. Surprisingly for a player of his class however, Higgins has won this tournament ‘just’ twice previously, though having reached the last four a year ago, I suspect that he will benefit as much as anyone from the recent change of venue. For whatever reason the Scot never appeared to take to the Wembley Arena, but he will be hoping for a good start against Ali Carter this week. You can read John’s thoughts ahead of the match here incidentally. 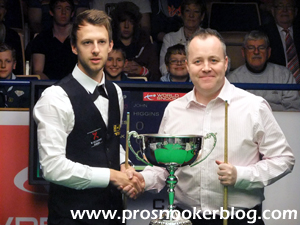 If not for one of those four, who else could be challenging for the trophy come next Sunday?

Last year’s runner-up Shaun Murphy will be looking to go one better and complete snooker’s triple crown as he told the world earlier this week and the signs are good, following his recent strong form en route to the final of the UK Championship in York. One of the most consistent players at the big events these days, he opens against Ricky Walden, before a potential meeting against John Higgins in the last eight.

Elsewhere Stephen Maguire remains as dangerous as ever and opens with an all-Scottish clash against Graeme Dott, while there will also be an all-Welsh clash between former Wembley winners Mark Williams and Matthew Stevens, neither of whom have shown any great form of late.

All in all, it promises to be another excellent tournament and it all gets underway tomorrow at 1pm UK time with that battle of the last two champions.

Stay tuned to PSB, both here at the blog itself and also on Twitter, for all of the latest updates.