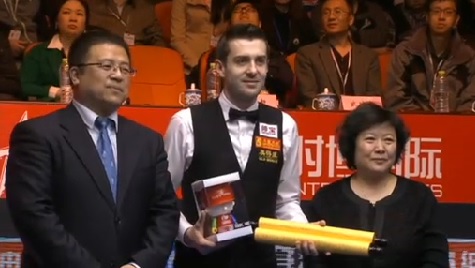 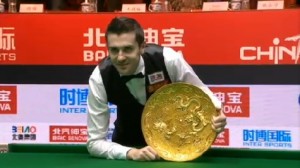 Mark Selby made it third time lucky in Beijing today, thrashing surprise finalist Gary Wilson 10-2 to win the China Open final at his third attempt, having finished as runner-up in both 2011 and 2013.

On paper, world number one Mark Selby came into today’s final against number 56 Gary Wilson as a heavy favourite, but after Wilson’s remarkable 6-5 victory against Ding Junhui in the semi-finals yesterday, all predictions were off.

In the afternoon session however, the match was to go far more according to plan for the top seed, Selby winning eight of the nine frames played with a top break of 145 to open up a near-unassailable 8-1 lead.

On their resumption, the pair traded century breaks, 136 from Selby, followed by 101 from Wilson, before Mark wrapped up victory in the next frame. 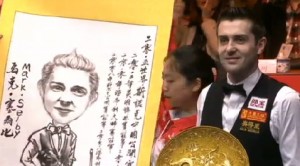 For Selby, it represents a successful end to a week that began with a real scare, as he struggled against Mark Joyce with a recurrence of the neck problem that threatened to end his career at the same event three years ago now.

With those fears hopefully behind him however, he now takes home the top prize of £85,000, cementing his place as snooker’s world number one heading into the World Championship and moves level with Ken Doherty on six career ranking event titles.

Indeed, some have commented that Mark has had a ‘bad’ season this time around, but having become the only player to have won multiple ranking event titles this season, winning two in a single season for the first time in his career, as well as the European Tour event in Riga, it has in fact been a successful year for him.

He might not have had to defeat a top 16 player this week, something that I can’t ever remember having been done before a ranking event, although I’m sure that somebody will correct me on that one, but he won’t care one bit and makes it three victories from his last three finals, having previously lost 8 from 11. 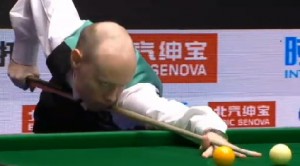 He now heads to the Crucible looking to overcome two ‘curses’ as not only has a first time world champion never been able to defend the title there, but also the winner of the China Open has never walked away with the World Championship trophy two months later. Nevertheless, for me Selby heads into Sheffield as one of, if not the favourite to win the title and it will be interesting to see how far he can get,

For Gary, a disappointing way for his Beijing adventure to end but regardless it has been a brilliant week for him, from which he has earned £35,000 and recorded by far the best achievement of his professional career to date. His victory against home favourite Ding Junhui yesterday in particular was something to be truly proud of and he now moves up to a career-high 37th in the rankings, up 19 places from prior to the tournament.

It is unfortunate in some ways that the China Open can become overshadowed by the World Championship qualifiers as it has with the qualifiers for the Crucible set to start this Wednesday, but still there have been some great stories from Beijing.

As well as Wilson, it was also a tournament to remember for Kurt Maflin, who turned around what had up until this point been a disappointing season to reach his second career ranking event semi-final, while Robin Hull gave his tour survival hopes a boost with a last 16 run.

Of course the main talking point was that of the seeding list for the World Championship and the impact that would have upon the Crucible draw, which I explained in full a couple of days ago here as Stephen Maguire made sure of the final automatic spot.

More information will follow in a separate post as far as the tour survival race is concerned, as now all roads points to Sheffield for the climax of the 2014/15 season…