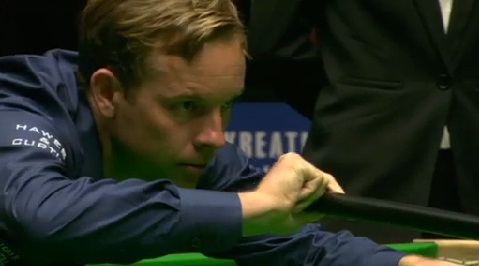 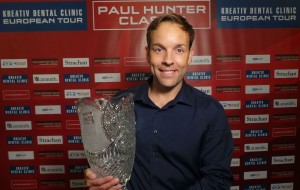 PSB: Hi Ali, it was a big weekend for you with victory at the Paul Hunter Classic, how satisfying was it for you to get that win under your belt?

Ali Carter: It was probably the biggest win of my career after what I have been through. There were a lot of doubts creeping into my mind. Obviously I played last year and I won the General Cup but after that I didn’t really do anything you know.

And then the start this year hasn’t been great. I lost to David Grace in the Shanghai Masters qualifiers and in all honesty he played very, very, very well against me, but I was so disappointed to lose because I love Shanghai.

But I’ve kept practising, with Mark Selby a lot actually and he said that I was playing really well, which I have been. So to go out there, produce it and win it was massive for me. To beat a top quality player like Shaun [Murphy] in the final and even Mark Williams in the quarters was even better. And Michael Holt, he’s playing well. He’s going to win something this year I tell you. Terry [Griffiths] is going to help him no end, I can see the change in him big time.

PSB: How hard is it to win these European Tour events? Physically and mentally…

AC: Mentally I’m absolutely drained, it’s two long days. I played on the Saturday and the Sunday. Sometimes I don’t know whether it’s better to play on the Friday and have the Saturday off because the Sunday particularly with four matches at 10am, 1pm, 4pm and 7pm, it’s a long, long day you know.

My first day helped because I won all of my matches quite easily, 4-0, 4-1 and 4-0, I didn’t finish that late. I won my last match 4-0 in about 40 or 50 minutes so I was able to get back to the hotel for half eight, nine o’clock time and have something to eat, chill out in my room. I wasn’t getting back at midnight and having to go back on at 10am which made all the difference I think.

But for me, that is definitely the best European Tour event to win. 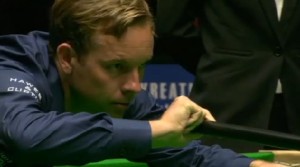 Ali in action in Sunday’s final

PSB: It’s probably no secret that you prefer the bigger events on the calendar but that one is a bit different isn’t it?

AC: Yeah course it is and it reminded me very much of the German Masters. It’s so well supported and it’s televised as well on Eurosport which is brilliant, so it did feel like a proper event.

PSB: And you have already mentioned, but where would you rank this one out of the tournaments that you have won. You have won some big events down the years…

AC: To be honest with you that ranks as the best win of my career, definitely, given what I’ve been through. I had a very nice call from Barry Hearn yesterday, just to congratulate me and say that he has known a lot of sportsmen in his time and 90% of them would never have come back from what I’ve come through. That meant a lot to me actually, I was very pleased about that.

PSB: Going back a year to when you came back and the attention that you got at the time at the Champion of Champions and UK Championship, how long did it take for you to move from being glad to be back, to being desperate to win again?

AC: I suppose the start of this season really. I went to the World Championship as competitive as I am and obviously I played alright against [Alan] McManus, but I just wasn’t strong enough against Neil [Robertson]. I know he played absolutely out of his skin against me but I was never at the races to win anything. I know I won the General Cup but that was an invitation event.

But this season I practised really hard before Australia, really hard and I was absolutely determined to win something this year. So to get a good win under my belt so early on, hopefully I can kick on from this and win some more tournaments this season. That’s my goal now.

PSB: What has been the biggest challenge to you getting competitive again? Getting back to the table, mental…

And even my first match at the weekend against Elliot Slessor, I felt absolutely awful and I was 2-0 up, I was playing terrible and the balls were going horrible and I actually sat in my chair and thought I can’t play anymore, I need to go and get a job! 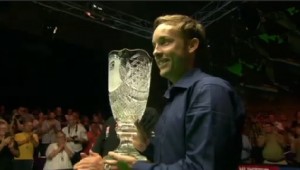 PSB: And I heard that you had spoken with former pro Brian Morgan in the run up to the event, who gave you a few pointers…

AC: Yeah I had a good chat with Brian Morgan and Steve Sylvester as well, who is a sports psychologist, and we had a philosophy about what to do. And Brian came to the club two days before I went to Germany and we just sat there and had a chat, hit a few snooker balls and he just said to forget about trying to win, let’s just stick to these five things, we’ll write them on a piece of paper. You can’t control winning, you can’t control what your opponent does. All you can control is what you do and I had these five things written down on a piece of paper, in my pocket the whole time and it’s funny that I managed to win the tournament!

Also having that bit of paper in my pocket gave me a really good attitude. I’ve been known to get the hump and all that, but I was absolutely fine no matter what was happening. I think I conducted myself in a good way and I got the win, so I was delighted.

PSB: And beyond the win itself, obviously it gets you into the Champion of Champions, up the Grand Prix list, to the Players Championship and so on…

AC: Well exactly yeah. Barry said ‘Champion of Champions son’ and all that which was good. I think that has pretty much guaranteed me for the Players Championship Finals and put me in good stead for the Grand Prix as well.

So that’s nice, it’s three tournaments that I can play in, three more chances of winning a big event and in all honesty, to come back after what I’ve been through and win so quickly, at such a big event, the Paul Hunter Classic. How about that? It’s unbelievable with what he suffered from and what I’ve been through. It just seems like fate. It was meant to be. 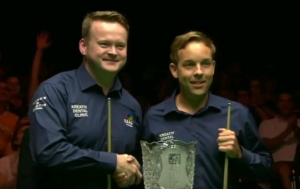 With Shaun Murphy ahead of the final

PSB: That event too, it has been going since 2004, longer than most of them. It has such a history now…

AC: Exactly and it has got better and better each year. I was gutted a couple of years ago I lost in the semi-finals to Gerard Greene and I was gutted then because I really wanted to win that event then so to get there this time and do it is extra special.

PSB: And now you have got a month off with not being in Shanghai…

AC: Which is perfect, I’m glad I’ve got a month off now after winning that. I can really enjoy my success because if you win a tournament now and then play in another tournament the next week and get beat, you are back at the bottom of the pile again. So it’s nice to win and to be able to take it easy for a month and then the season really gets going again from October onwards. I’m looking forward to the rest of the season now.

PSB: Are you going to put the cue away for a bit?

AC: Yeah, I am. I’m going to have this week off certainly and take it easy for a couple of weeks. Then ten days or so before Barnsley I’ll start stepping it up because obviously I want to qualify for the big events and get some money on the prize money list to get my ranking back in the top 16.

PSB: Does it suit you for the season to be a bit more stop-start like it has been?

AC: It suits me being a bit more stop-start, I like a few gaps in between tournaments so I can enjoy my life. I have got so much going on in my life that it’s not as if I want to eat, breathe and live snooker. I’ve got my little boy and my other hobbies, other business and that. So it’s nice to play a bit, have a bit of time off and get ready for another event, rather than unpacking your suitcase only to pack it up again a couple of days later. 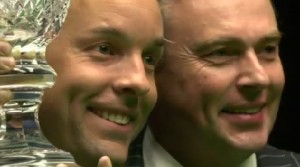 PSB: And like you say, your ranking as well, it’s probably going to take a bit of time to sort that out, does that bother you?

I have got to look at it long term, it is probably going to take realistically until next year to get in the top 16. I’m hoping I will get in this year and I’m hoping for this year, but next year I won’t have any money to come off in the first half of the season and that’s when I am really going to gain.

PSB: I think you are going to have to make up around £50,000-£60,000 this year, but then if you win the International Championship or something, you have done it so it’s not as bad as it sounds.

AC: Exactly, it’s nowhere near as bad as it sounds and that £20,000 that has gone on there this week has given me a little cushion to the top 32, I’ve made up a bit of ground there.

PSB: Finally, how much has support within the snooker community meant to you, in particular the show of appreciation after Sunday?

AC: I had loads of texts from loads of players which was humbling. I had lots of people sending me messages on Twitter, so much love on there.

Joe Perry, John Higgins, Dennis Taylor, Steve Davis, Mark Williams, you name them they all have. Murphy, Selby, the list goes on and on and it’s so nice that everyone seems to be genuinely pleased for me that I’ve won that event.

Congratulations again to Ali, who will next be in action at the Barnsley Metrodome during the International Championship qualifiers, which get underway on 30 September 2015.