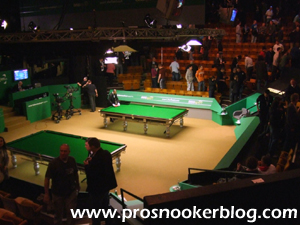 As promised, part two of my 2008 snooker awards. Click below to see whether you agree or not…

An obvious choice it might be, but with two maximums and a series of memorable matches, I can’t look past the World Championship for this award.

There were just so many highlights, in the first-round alone there were a string of close matches, the epic between Stephen Hendry and Mark Allen as well as deciding frame victories for Peter Ebdon, Ding Junhui and controversially Ali Carter whose match with Barry Hawkins was pulled off at 9-9 with the man from Kent very much on fire.

Furthermore the tournament also saw the emergence of Chinese young guns Liang Wenbo and Liu Chuang, the former going all the way to the quarter-finals before being stopped in his tracks by eventual winner Ronnie O’Sullivan.

Perhaps the only thing that could really have improved the event was a closer final, as ultimately it was a bit of a mismatch as Carter slipped 6-2 behind after the first session and never really got back into it. Still, it was probably my favourite World Championship since the 2003 event and hopefully next year can be even better.

New Event of the Year: World Series of Snooker

Having gone through a few years that have seen relatively few new additions to the snooker calendar, 2008 has seen the introduction of a number of fresh tournaments.  While Bahrain saw ranking event snooker return to the Middle East and the Championship League proved to be a hugely popular new event with the players, for me it is the World Series that has been the biggest success this year.

Interest in mainland Europe has clearly been strong for a few years now and it was great to see some of snooker’s top players playing in front of sizeable crowds in places like Jersey, Warsaw, Moscow and particularly Berlin where I’m told that more than 1,500 visited on each day.

You can read more about the organisation and the Series here. Hopefully the success that it has found so far will continue into 2009 and we will soon see at least one ranking event held in Germany for example…

Final of the Year: Maguire defeats Murphy to take the China Open

After a year in 2007 which saw relatively few finals of note, 2008 saw a number of close finishes, at least three ending after midnight local time.

Though the finals in Bahrain, Shanghai, Wales, the Grand Prix and the UK Championship were all dramatic finishes, it was the China Open final that really stood out for me. Not only was it close, but it was a match of terrific quality, with four centuries and eight other breaks over 50 as there was nothing to choose between both players. In the end though it went all the way to the colours in the 19th frame and it took a terrific shot from Stephen Maguire on the final yellow to finally free the green and seal a memorable victory.

Session of the Year: Ronnie O’Sullivan against Stephen Hendry at the Crucible

Of all my awards, this has to be one of the least controversial as from being level at 4-4 with Stephen Hendry following the first session of their World Championship semi-final, Ronnie O’Sullivan produced a masterclass in the second to take all eight frames and move 12-4 ahead.

The frame scores tell you all you need to know:

Escape of the Year: Ronnie O’Sullivan against Judd Trump at the Grand Prix

I might be forgetting something here but I can’t believe that there will have been too many better escapes this season than this effort from Ronnie O’Sullivan during his defeat to Judd Trump in the Grand Prix in October.

Having signed a five year deal with 888.com to sponsor the World Championship until 2010, it looked like snooker would be ok for sponsors for a while yet in the post-Embassy era, but with them having pulled the plug on their deal after just three years, the future of the tournament looks to be uncertain once again.

With Saga Insurance following suit with the Masters and the sponsors of the other two BBC events not yet secured for 2009, it looks like WSA will have a tough few months ahead of them as they look to secure the financial future of the sport. Although it looks to be a little too late for the Masters, hopefully they will find a partner of some sort for the Crucible in April otherwise the cash reserves of the governing body will take something of a hit…

While there were a few controversial moments this year such as in the Joe Swail/Liang Wenbo match at the Crucible and Ronnie O’Sullivans comments during his press conference in China, there could be only one winner here.

With several reports and stories suggesting that the last 32 match between Stephen Maguire and Jamie Burnett would end up finishing 9-3, this is exactly what happened as Jamie handed the match to Stephen with a notable miss on the black.

Whether there was any wrongdoing here remains to be seen as the governing body has launched an official investigation into the subject, but as far as the sport in general goes, it might just be that the damage has been done. Hopefully both of the players concerned will be shown to be innocent an both can resume their careers with their reputations untarnished…

Innovation of the Year: The open draw format at the Grand Prix

Following the problematic round-robin format that had been seen at the Grand Prix in 2006 and 2007, it was clear that something had to change for this season and indeed it did as the WSA introduced an FA Cup style open draw format to the tournament.

As I said at the time, despite criticism that it would be unfair on the top seeds as they would lose out on the theoretically easier draws earned as a result of their ranking, I felt that it would be a positive move for the tournament and right now I still feel the same.

The players certainly seemed to take to it as I don’t remember a negative comment being mentioned in the press and the live draws helped to keep the tournament exciting and unpredictable as you did not know who would be playing who next. Fears that it would help a lesser-known player to win the event were also unfounded as in the end it was double world champion John Higgins who took his fourth Grand Prix crown.

Hopefully the format will be retained for next year and we will see another excellent tournament in Glasgow.

Worst Dressed Player of the Year: Shaun Murphy at the UK Championship

Since the Masters back in January it looked like Ken Doherty would be a certainty for this award given the rather wild shoes he turned up in, but right at the last event of the year, Shaun Murphy managed to go one step further with his silver boots and grey pinstriped attire.

I may mock, but I doubt that he will care too much as it certainly proved to be a lucky charm for him as he marched to his biggest title since the 2005 World Championship. Perhaps we will be seeing it in action a few more times in 2009…