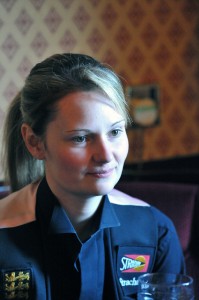 First … I want to thank Matt for inviting me to post on his blog and offering the opportunity to share some of my views on a not so well known area of snooker, the Ladies’ game.

I’ve been following the ladies for a while now and I have been in three ranking events already this season. There is no denial that the level of the ladies’ game is way behind the men’s. Reanne Evans, 24, is the current WLBSA World Champion; she’s won it five times, she’s also the current IBSF World Champion. She’s undefeated for 49 matches in WLBSA ranking events, and counting. Her high break in competition is 140. That’s pretty impressive and yet she hasn’t been able to qualify for the main tour, despite taking part of the PIOS in the past. Also she will certainly lose her IBSF crown in the coming days because she hasn’t been able to travel to India to defend her title, by lack of a sponsor. So what’s wrong? Will we one day see a female amongst the game elite, or not?

“No, because girls are inferior …”

Yes, I’ve read that, literally, on forums. I’m hugely interested in neuroscience and I’m the first to accept that, on average, there are significant differences between “women’s brain” and “men’s brain”. While girls are usually better at verbal and social skills, boys have a better eye-hand coordination and spatial perception, both characteristics that would make them more apt to a game like snooker. They are also more competitive, again on average.

I wrote “on average”… because that does not mean anything when considering the individual. So you would expect that, given snooker does not require real physical strength, provided enough girls play the game, and proper coaching, at least some of them would be able to compete with the top boys. Today this isn’t the case. So why?

The answer is: because not many girls take on the game… although according to some coaches their number is increasing. There are several reasons for that situation to happen.

Having been to several ladies events over the last year, I’m convinced their snooker is every bit as interesting and enthralling as the men’s. Not so many big breaks but, partially because of that, a lot of twists and turns, drama and tension. Bringing the ladies in the media could attract a different type of audience and sponsors. After all it’s mainly the women doing the shopping. So it’s well worth to try and improve the situation. But how?

The floor is yours for comments and suggestions…

I want to thank Chris Turner, Mandy Fisher, Janie Watkins, Mark and Hannah Jones, Tim Dunkley, Marianne Williams, Dan Lewis, Simon Markham and Reanne Evans for taking the time to discuss this subject with me and providing me factual information that contributed to the “birth” of this article.

Thanks to Monique for such a well-researched article (Matt).