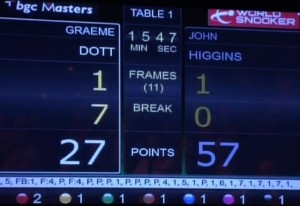 Those of you watching the third frame of the match between John Higgins and Graeme Dott last night will have noticed the scoring incident, something that subsequently prompted much debate as to what exactly the correct call should have been. Click below for my take on the matter…

For those of you who do not know what I am talking about, you can watch the incident here (UK residents only), or alternatively here.

In short however, the debate centred around whether referee Jan Verhaas should have awarded either four or five points for a foul which saw John Higgins make contact with the brown with his cue whilst attempting to escape from a snooker, an attempt which would ultimately see him make contact with the blue and not a red.

Initially Jan called a foul of five penalty points, something which caused me to raise an eyebrow on the basis that I had expected the award to be for four due to the fact that the initial foul had come on the brown, a view apparently shared by BBC commentators John Parrott and John Virgo who were commentating on the match the time.

For whatever reason, only four points were added to the arena scoreboard and noticing this a few shots later as Graeme’s break hit 13, Jan asked him to stop so that an extra point could be added to his tally. During the time that it took to correct the scoreboard however, a voice can be heard telling Jan the the foul came on the brown, resulting in him changing his mind and asking for the scoreboard to be changed back to what it was before the interruption. Unfortunately when play did resume, Graeme then missed his next shot and would eventually go on to lose the frame.

Should it have been four or five? There has been much debate, but the answer appears to have come from fellow leading referee Eirian Williams who after initially suggesting that four points should have been awarded, on Twitter has today stated the following:

“I need to clarify last nights’ incident now that I have seen the footage this morning for the first time.I replied not having seen it but the phone call I received didn’t say that the CUE that fouled the brown. I therefore responded the way I did. However, the foul WAS 5 as it depends on the first impact of the CUE BALL. I am happy to clarify this. Therefore, Neal Foulds was absolutely correct – AS WAS JAN VERHAAS!”

Indeed Neal was immediately of the opinion that the award should have been five points and today told me:

“A very unfortunate situation. Jan got it right was persuaded otherwise. It was indeed a 5 point foul as he said intially. I am amazed that people thought it was anything but a 5 point foul. Its obvious really, the highest foul applies.”

And this can clearly be seen at Section 11, sub-section (g) of the Official Rules of the Games of Snooker and English Billiards, which states:

“If more than one foul is committed in the same stroke, the highest value penalty shall be incurred.”

It would appear clear then that the initial decision to award five points to Graeme due to the fact that John had made contact with the blue first, was the correct one.

Whether or not the incident had a significant bearing on the match it is difficult to say, although the way John subsequently played I think that Graeme would have been hard pushed to have turned the tables even had he been able to take that third frame. We will though of course never know.

Regardless of that however, these things happen and the incident does nothing to change the fact that Jan is one of the best referees in the world, if not the best and hopefully this will be remembered by all who watch the game. Being a referee is far from an easy task given the levels of concentration required and it is only because such incidents are so rare in the game that they warrant so much discussion when they do happen.

For me a bigger problem than how many points the foul should have been would appear to be the difficulty involved in rectifying the arena scoreboard when there is an error, regardless of the circumstances. You may be wondering why given that one point needed to be added to Graeme’s score, a point could not simply have been added to his tally.

As I understand it however (and I am open to correction on this), the only way to do so would be to show that he has potted a red, thereby removing a red from the remaining screen which in turn would affect the points remaining tally not only on the arena scoreboard, but on the livescoring on your PC. When you take into account in-play betting, the consequences of this could be wider-reaching than would first appear!

Presumably there is a good reason why this cannot be easily sorted, but it just means that in the rare event that the scoreboard is not correct, it can take some sorting out.