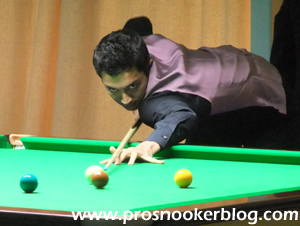 Congratulations to India’s Aditya Mehta, who yesterday defeated compatriot Pankaj Advani to win the Asian Snooker Championship for the first time in his career…

It was Aditya’s third appearance in the final of the competition and after a gruelling five hours and 50 minutes, he was able to come through 7-5 to lift his first international title. In doing so, he becomes just the third Indian to win the competition in its history, following in the footsteps of Yasin Merchant (1989, 2001) and Alok Kuma (2004).

Following a quietly impressive season on the main tour, although Aditya was not able to retain his tour status as of right (in part due to a series of unkind draws), he will remain a professional for 2012/13 by virtue of having received the Indian nomination as he recently confirmed on Twitter.

Aditya gave his reaction to his latest success, also on Twitter:

“Absolutely thrilled and over the moon.. It’s destiny.. After years and years of failure, the hard work is paying off.. #isthisadream”

Click here for a detailed review of the final.