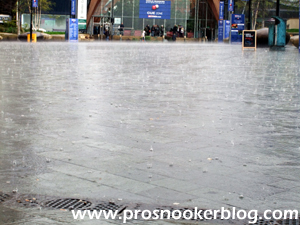 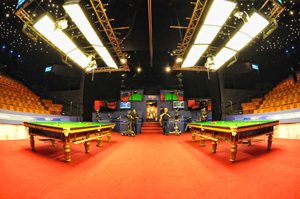 Day nine at the Crucible as we hit the second Sunday with two new matches getting underway this morning, while the afternoon session sees the resumption of the match between Mark Williams and Ronnie O’Sullivan, as well as the intriguing match between Judd Trump and Ali Carter…

Another day, another rainstorm in Sheffield as the clouds that have been in permanent situ from the moment I arrived here last Saturday have continued to rain down on the Crucible Theatre once again.

While it will not have made a difference from the vast majority of people who are watching the tournament on television, I think it is fair to say that the weather has killed the atmosphere around the venue this year, particularly in comparison to last year which was the warmest World Championship since I have been coming to the tournament.

Still, once in the arena the action is all the same and the morning session has been an entertaining one, Barry Hawkins taking a 5-3 lead against Matthew Stevens heading into the second session, while Andrew Higginson and Jamie Jones are locked at four-all following a topsy turvy eight frames. In what is a match between two qualifiers, it is hard to imagine it being a runaway from either and looking at the match statistics on the monitor here in the media centre, that still looks to be the case after one session. 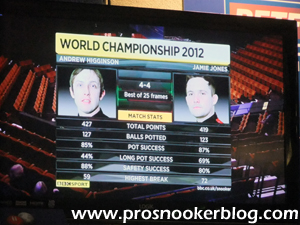 Looking ahead to the afternoon, I will be looking to get back in the arena for the resumption of the clash between Judd Trump and Ali Carter, with Ali holding a 5-3 lead overnight against the bookies favourite. I must confess that pre-match I had expected Judd to raise his game after a tough first match, but having given the Ace the benefit of the doubt following his bout of food poisoning, he continued to look off his game during yesterday’s opening session.

Ali meanwhile looked sharp, his long game in good shape and it was important for him to take the final frame of the last session to secure an overnight advantage.

As for the other match this afternoon, Ronnie O’Sullivan resumes 5-3 up against Mark Williams and having win 15 straight matches against his Welsh opponent (excluding the Championship League), it is difficult to see that changing in 2012.

Resuming at 5-3 down, Judd Trump immediately laid down a marker early in the second session with an opening frame century break, an opportunity created by a snooker behind the yellow from which Ali could not successfully escape.

Perhaps the biggest frame of the match so far however was the tenth, during which both had chances, Judd missing a black when leading by 40 points, before Ali missed the final pink to the left-centre, immediately sighing as he knew that he had missed from the moment that his cue struck the ball. Eventually Ali was to earn another shot at the pink up into the yellow pocket, but as it stayed out, Judd potted it to draw level at 5-5.

Impressively, Ali was able to hit back immediately with a clearance of 112, before Judd survived a missed pink on 43 to make it 6-6 at the mid-session interval. 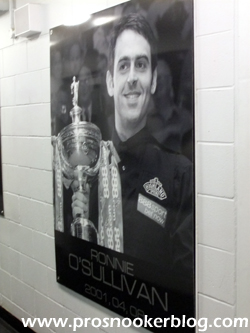 As they resumed, Judd was able to move into the lead for the first time today with a break of 80, before winning another significant frame during which Ali appeared to lose his cool, most obviously when snookered for what seemed like the umpteenth time during the session.

To his credit, having left the arena briefly after that frame, Ali came back to win the next and close to 7-8, before Judd wrapped up the final frame of the session in little over six minutes to secure a two-frame leading going into tomorrow’s final session.

With an improved performance compared to last night, Judd has put himself back in the box seat as favourite to come through and book his place in a second successive final now, though having got away with a few misses at important times, it could have been a different story today.

There was to be a bit of banter between the two on Twitter later in the evening, so it will be interesting to see how they greet each other ahead of their final session.

Aside from the match itself, sitting so close to the action as is possible, there are always little quirky moments and things that you see which I wanted to share. One thing I noticed today is like last year, just how much Judd likes to look up at the replays on the television screens in the arena, particularly after he has just missed one of his trademark long reds, as well as when his opponent is at the table.

Another making use of the television was referee Olivier Marteel, who when looking to check the location of the balls when Ali could barely see the pink sticking out from behind the black in frame 10, looked down the viewfinder on one of the floor cameras to check the line, giving cameraman Duncan a thumbs up shortly afterwards. I had noticed Michaela Tabb do the same earlier in the week, it’s just one of those little tricks that you don’t see when watching at home.

Indeed watching the referees is always strangely impressive as while it might seem that they have an easy job, in reality their task is far from easy. Constantly on the move, being careful not to walk into the cameramen, making sure that the pockets do not become over-filled, keeping their gloves damp by using a damp cloth every other frame, keeping the crowd in check and then actually managing the game. It is incredible just how much they have to do.

What also struck me was just how consistent Judd’s break-off shots were, especially during the opening session in which Ali seemed to be in behind the yellow every time he came to the table. 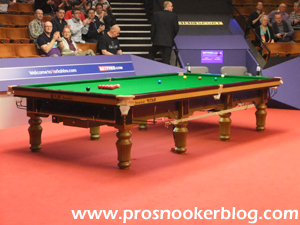 Meanwhile today, over on table two Ronnie O’Sullivan by all accounts produced one of his finest sessions of snooker at the Crucible in recent years to move to within just two frames of a place in the quarter-finals. While I could not see the action, it was clear from both the scoreboard and the raptures coming from the audience that Ronnie was producing something special. Even the sound of the balls hitting the back of the pockets sounded good if that makes any sense!

Trailing 11-3, Mark could not have been blamed for wanting to get out of there as soon as possible, but he dug in to keep the match alive overnight and avoid losing with a session to spare for what would have been the first time in his Crucible career.

Following this, due to not having originally had the time off work to stay for the second week in Sheffield, I had to check out of my hotel and head for home, though thankfully I will be back at the venue to continue blogging from Monday afternoon.

Whilst I was on a train heading up north however, Jamie Jones was in the process of establishing a 10-6 lead against Andrew Higginson, taking the last of the session courtesy of a brilliant double on the black. Another key frame proved to be the 14th as having seen his opponent falter, it looked for all the world like Andrew would clear for 8-6, only for the Widnes man to miss the final yellow off its spot as Jamie cleared for 9-5.

Over on table two, Matthew Stevens fought back well from 3-6 and 6-8, to come out of the session 8-8 with Barry Hawkins, leaving their match very much in the balance heading into tomorrow. They will resume at 1pm tomorrow alongside Trump and Carter.