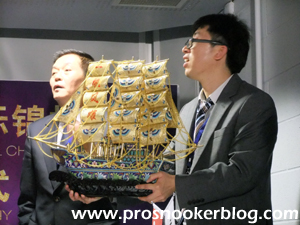 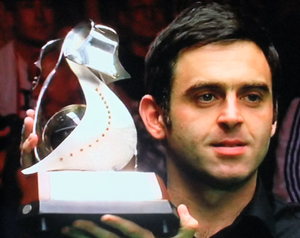 The build-up to the start of the new professional season continued today with a couple of press releases from World Snooker, the first in relation to the new Asian PTC Series and the second in respect of the venues for the 2012 Premier League…

Much as described during Barry Hearn’s second press conference at the recent World Championship, today’s announcement confirms that next season there will be three new Asian PTC events (APTCs), each carrying the same ranking points tariff as the existing European PTC events.

The dates can already be found in the latest version of the 2012/13 calendar, while the venues are Zhang Jiagang, Yixing and Chengdu respectively.

For me these events are a good idea, primarily because they allow players in Asia an opportunity to get onto the main tour without having to first come to the UK. I remember that back in 2009 I spoke to Jin Long as he smoked a cigarette between sessions at the World Championship qualifiers and he explained to me how difficult it was for Chinese players to make it onto the main tour.

Back then (only three years, but in snooker terms it feels like a lot longer!) there were barely a couple of nominations available, otherwise they would have to try their luck throughout the year during the now-defunct PIOS series. These days of course it is a very different story, with more nominations available to Asian players, as well as a route to the tour via the Q School series, far more feasible than having to compete throughout the season on the PIOS tour. Eventually I wonder whether we might see a standalone Asian Q School, which to me would make a lot of sense, but in the meantime this is at least another step in the right direction.

What will be interesting for me is just how many of the UK-based professionals will compete in the events. Will we see the top players prolonging their stay in China around the major ranking tournaments? Will we see the lower ranked players flying out just for the pure purpose of competing in the APTC events? I can’t imagine that it would be viable financially unless they were to win a number of rounds, but over the last couple of seasons, with ranking points on offer, we have already seen players competing in events that otherwise they might not…

As previously posted here at PSB, the Premier League finals will be held at the Grimsby Auditorium for the first time, moving from their previous home of Potters Leisure Resort in Norfolk.

Otherwise, the calendar looks reasonably familiar, I hope to make it back to Doncaster for a second year, in addition to y regular Grimsby trip, though it will be strange making that for the finals weekend rather than during the usual Thursday night league phase.

Read more about the changes to the Premier League format here.

Who should be given the final place? On merit I would suggest that Stephen Maguire would be clearly the most deserving candidate, but commercially could Barry be tempted by one of the legends, or perhaps even young Luca Brecel?