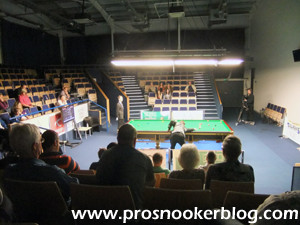 An important line of news to bring you from the South West Snooker Academy today concerning the points to be removed at the first seedings revision. As regular readers will know, I have been keen to learn exactly which points will be removed at the season’s first seedings revision on 12th August 2012, but until now I have been unable to receive confirmation of this from World Snooker.

Yesterday however, I asked Mike Ganley who kindly said that he would look into it, and today he explained that all of the points that will be coming off at the first seedings revision, have already been removed. In other words, the points from PTC1 and PTC2 back in 2010 which were removed after the Wuxi Classic, will be no longer count towards the next seedings list.

Importantly, this differs from what I had taken into account on my latest projected seedings list, as I had also removed the points for PTC3 which took place between 6-8 August 2012, on the basis that by the time the first cut-off comes around, they will be more than two years old.

For whatever reason however, those points will continue to count at this cut-off and I have therefore added the points from that event back onto my totals.