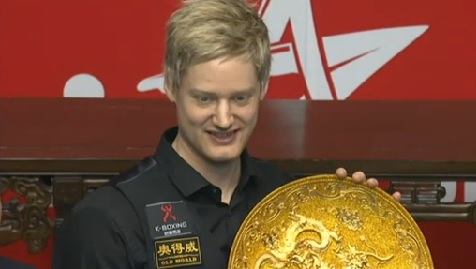 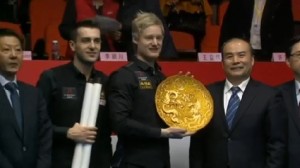 It has been a long time in coming, but Neil Robertson today captured his seventh career ranking event title in Beijing, defeating Mark Selby 10-6 to win the 2013 China Open.

Earning him the top prize of £85,000, together with 7,000 ranking points, the result will no doubt come as a big relief to the Australian, as attention now turns to Sheffield and the all-important World Championship…

With two of snooker’s leading stars through to today’s final, opinion was divided as to which way it would go, with the only common area of agreement being that it would be close.

After the first session however, even those predictions looked to be wide of the mark, as Neil Robertson bounced back from losing the opening frame, to win the next six on the spin, during what was a scrappy opening part of the match.

While it would have been tempting to have written off Mark Selby at 6-1 down, if there is one player who you would fancy to recover such a deficit, then Selby would probably be that player and he duly set about coming back at Robertson by taking the first three frames of the second session to close to 6-4.

Having seen his opponent hit breaks of 125, 81 and 66 to get himself back in the match, Robertson responded well to steady the ship, taking the final frame before the interval with a run of 110, before a brilliant clearance on the colours put him four clear again at 8-4.

As Neil took the next to move just one away from the title, the match looked to be over, but Selby had other ideas as he dug in to take the following two frames with breaks of 116 and 63 to close to 9-6.

Robertson though was not to be denied the title and despite a major scare towards the end of the frame when Selby got four of the five snookers that he needed to be able to win, eventually potted green, brown and blue to secure the title. 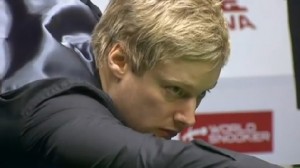 For a player as highly regarded and who has been as consistent as he has in reaching the latter stages of tournaments, it may come as some surprise to realise that this is Robertson’s first full-ranking event since the 2010 World Open, which came shortly after his world title victory at the Crucible earlier that year.

It is hard to put a finger on quite why it has taken him so long, particularly given his record in finals over the years, but it was clearly something that he will have been well-aware of himself and with the title in the bag, he can now prepare an assault on a second world title at the Crucible next month.

On the subject of the Crucible, the victory also moves Robertson up above Judd Trump and into second place in the official world rankings when they are revised tomorrow, which means that Robertson will now be seeded third for the World Championship, switching halves in the draw with Trump. More on that is to follow in a separate blog post.

As for Mark Selby, a second final defeat in three years in Beijing, but he will be relatively happy with his work this week and like Robertson, heads into Sheffield with his game in good shape as he looks to complete snooker’s triple crown by winning the World Championship.

With all due respect to what is a terrific tournament in its own right, with the China Open now complete, all attention is now very much on the World Championship, with the qualifying draw set to be released tomorrow. As ever, there will be full coverage of the tournament here at PSB, as I will be attending both the qualifiers and the venue stages of the tournament myself.

Thoughts on the upcoming draw will follow, together with a look at the various ranking implications ahead of the end of the season…