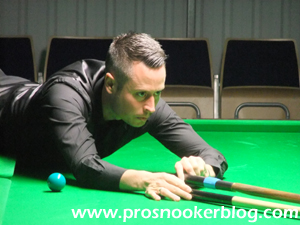 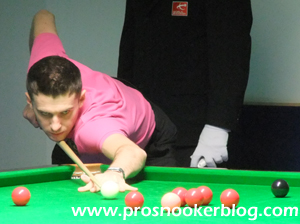 Having crashed out of the Wuxi Classic in the opening round, for a while it looked as though reigning UK and Masters champion Mark Selby would again lose his opening match at a full-ranking event to Preston’s Ian Burns today, but he eventually came back to avoid defeat.

Not so fortunate however were Ricky Walden and Michael Holt, who were the highest ranked casualties of day two in Bendigo…

Trailing last season’s ‘rookie of the year’ Ian Burns 3-0 early on, it did not look like it would be Selby’s day but with breaks of 64 and 87 the Leicester man was able to draw level. Back then came Burns with breaks of 39 and 34, before he opened up a 47 point advantage in the next to leave himself on the verge of surely the biggest single win of his career to date.

Selby though is not known as the ‘master of brinkmanship’ for nothing and he duly lived up to his reputation by producing a clearance of 63 to force a decider, which he then took in two scoring visits to secure his place in the last 16.

By all accounts Ian had his chances today, but without having seen the match due to work commitments, I am not sure how clear cut an opportunity he had to win the match. Regardless though, hopefully he will be able to take the positives from another excellent run and the experience of playing such a high ranked player at a venue will serve him well when he makes it back to a venue again.

Elsewhere, Fergal O’Brien extended his head to head record against World Championship semi-finalist Ricky Walden to 3-0 today, also winning 5-4 to reach the last 16 stage of a full-ranking event for the first time since the 2012 Wuxi Classic.

Another seed to fall was Michael Holt, who found himself on the wrong end of an impressive scoring display from Alfie Burden, who hit breaks of 136, 68 and 66 on his way to a 5-2 win. Remarkably, this represents Alfie’s first appearance at the last 16 stage of a tournament since the 2000 Malta Grand Prix and he will now be looking to make it through to the quarter-finals with a win against either Mark Davis or Paul Davison, who meet tomorrow.

There was to be little trouble however for Shaun Murphy and Joe Perry, who between them dropped just one frame in the early hours to defeat Michael White and Xiao Guodong respectively, while Dominic Dale edged out Mike Dunn in a decider to also advance.