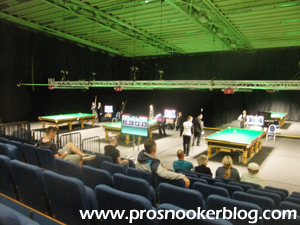 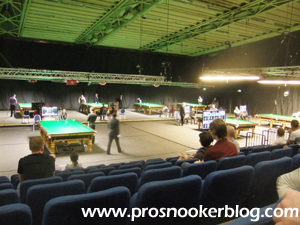 Yesterday saw the opening day of the Indian Open qualifiers take place at the Doncaster Dome and as those of you who follow me on Twitter will have noticed, I attended the venue to sample snooker’s newest qualifying venue for myself.

Arriving at the venue early afternoon and managing not to get lost (unlike my first time at the venue for the Premier League back in 2011), I headed on in and met up with Roland from Snooker Island, before heading on into the hall for the first time.

Having seen the photo of the venue posted on Twitter last week, I had expected the set-up to be like that at the EISS where the World Championship qualifiers were held, however in reality the playing area felt quite different to me. The seating is a lot lower down than at the EISS and for spectators to get to their seats, they virtually have to walk onto the edge of the playing area, which in the case of one man in particular, was clearly a distraction for the players at times.

With minimal security, it felt like something of a free for all, and relies heavily on the common sense of the spectators, for example not to walk across the line of player’s shots when they are potting a black off the spot, in order to work.

The other talking point was the heat at the venue, which led to some describing it as a sauna and you may have noticed on he live streams, no requirement to wear the usual regulation bow tie. Though it did not feel too bad in the evening, under the lights it will always be warmer, indeed if you have never been under them, you would be surprised at just how warm they are.

The knock-on effect from the humidity (remember there is a swimming pool at the venue also), seemed not only to be discomfort for the players, but a large number of kicks and bad bounces, that were catching almost all of the players out at some stage.

All of that said, there are some positives about the venue, indeed last season we were not able to watch any of the qualifying action from the EIS Academy in Sheffield, so the opportunity to simply watch the snooker should not be underestimated. There is a reasonable view of most of the tables, although some can be obscured by large scoreboards depending on where you sit, while it is difficult to follow the back tables due to the sheer distance.

It did not escape my attention though that there were very few spectators there who were not either players or relatives, so it does make you wonder how financially viable this set-up is. I hope that in time if this venue is to become a regular fixture, attendances will increase so that the clamour for venues with spectator seating is justified going forward.

As far as the action on the baize was concerned, the first snooker that I saw was the deciding frame of the match between world number one Neil Robertson and Finland’s Robin Hull, an experienced player with ability clearly greater than his current ranking.

The first chance of their final frame shoot out fell to Robin, however a missed red on 21 was to open the door for Robertson, who duly showed why he is the world’s top ranked player at the moment with a well-taken clearance of 96.

Following that match, we shuffled left to the centre of the playing hall to watch the match between Sight Right duo Martin Gould and Sean O’Sullivan, which on paper looked to be the most interesting of the day’s second session. Wither neither player hitting top gear, the match swung back and forth, with a good brown to black clearance from O’Sullivan seeing him level at 2-2, before Gould took the next from behind with 63.

The match always had the feel of a decider and that was exactly what would come, as Sean hit back again to take the sixth on the colours, before dominating the final frame to book his place at the venue stages of a full-ranking event for the first time in his career.

Other winners in the afternoon were John Higgins and Barry Hawkins on the streamed tables, as well as Fergal O’Brien, Anthony McGill, Joel Walker, David Gilbert and returning pro Alex Davies, who defeated Dave Harold to make it to his second venue of the season.

Having grabbed some food at the bar up at the venue (don’t try the cookie mountain, it’s not as good as it sounds on the menu), we then headed back on in for the evening session and took a seating position right up at the back. While it may sound a bit odd, at venues such as this, I actually quite like being a bit further back and being able to take in a number of the matches and felt more comfortable than I had sat further forward in the earlier session. 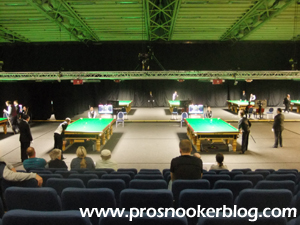 And there were a number of good matches, as Ken Doherty took an early 3-0 lead against Luca Brecel before eventually surviving a fightback to win 4-2, while I also had the opportunity to watch young Ryan Clark for the first time, as he took on James Wattana. Experience told in that match as Wattana took a series of frames on the colours to claim a 4-1 win, while over on the far left, Mike Dunn made short work of what looked to have been a difficult match with Thepchaiya Un-Nooh to continue his return to form. The highlight of that match was a 49 clearance to the pink from Dunn, before he later doubled the black to move 3-0 ahead.

Over on the streamed tables, there were to be a couple of upsets as both Graeme Dott and Shaun Murphy failed to qualify, defeated by Ratchayothin Yotharuck and Robbie Williams respectively. For Dott perhaps the defeat was not too much of a surprise, as he was playing his first tournament with a new cue, while for Murphy it marks two defeats from two at the 128 stage of events this season. It was not lost on some that Murphy has thus far been the biggest victim of the change to a format which he has publicly championed, however I am sure that he would put his defeats down more to his own form than the change of format.

As the day drew to a close, I could not help but reflect that the change to a best of 7 format, however necessary due to the situation with the venue, was a far bigger change from a best of 9 than I had realised. With both the shortened format and the way that the arena was laid out, the event very much had the feel of a PTC about it and I had to keep reminding myself that these were actually ranking event qualifiers.

It is difficult to explain, but at a PTC, the format I think does work, as with matches being roll-on, roll-off, with three matches in a day for those who win, there is always plenty going on and they work as self-contained events. With just one match to qualify for a venue however, somehow it does not feel quite the same and it is amazing just what such an apparently subtle change to the match duration does actually make to the context of the match.

Regardless, the action continues today and I will be heading back over to see in particular how both Pankaj Advani and Aditya Mehta get on, India’s two professionals who will be hoping to make it through to the venue stages of the event that they had a massive hand in creating…