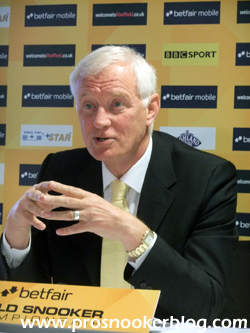 All snooker players who dream of competing on the professional tour take note: Q School 2015 is now open for entry!

The tournament will take place in May and for the first time it will be held at the Meadowside Leisure Centre, Burton.

Once again there will be EIGHT TWO-YEAR TOUR CARDS available, given to the semi-finalists in each of two events. The entry fee remains £600 and Q School is open to players of all ages and nationalities (subject to terms and conditions).

Those eight players will go on to compete for over £8 million of prize money on snooker’s global circuit, playing in the biggest tournaments against the sport’s top stars.

Entries are now being taken, just go to www.wsplayers.com and follow the instructions. All players are strongly advised to get their entry in as soon as possible. The closing date for entering Q School is Monday April 6th, 2015.

World Snooker Chairman Barry Hearn said: “You’ve seen the majors like the World Championship and UK Championship on TV or in the arena. You’ve dreamed that could be you one day. Well, if you’ve got the ability and the determination, it could be. Snooker now is all about opportunities: the events are there, the prize money is there, the chance to climb the rankings swiftly is there. It’s up to you.

“Q School is the fairest way to give all players the chance to earn a tour card. Turn up in Burton in May with your game ready, win enough matches and the card is yours. Snooker is growing internationally year after year. Now is the time to get on board. Get your name down for Q School because it could change your life.”

As in previous years, a ranking list will be compiled during Q School, with players earning one point for every frame won. During the main tour season, should any of the tournament draws fall below a total entry of 128 then the field will be topped up with the highest ranked players from the Q-School list who have not gained one of the eight tour cards.

Oliver Brown finished tenth on the Q School ranking list last year and, as a ‘top-up’ player, has competed in all six ranking events so far this season, and beaten several pro opponents including Ding Junhui.

“It has been fantastic for me to play in so many tournaments this season despite not getting through Q School,” said Derbyshire’s Brown. “To play in big events like the UK Championship and against top players has been great experience and given me an idea of how it would be to play on the pro tour. Q School is a good system and it proves which players are capable.”