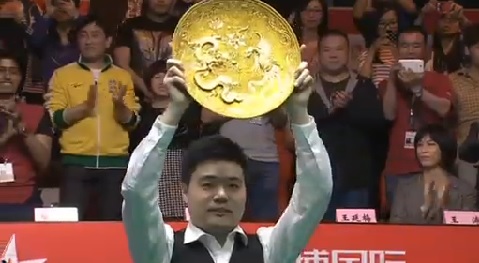 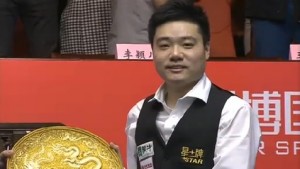 A historic day today for Ding Junhui, who has defeated Neil Robertson 10-5 to win the China Open for a second time, in the process claiming a record-equalling fifth ranking event title of the season.

It was a battle between arguably the two most consistent players of the season (although Ronnie O’Sullivan might have something to say about that), but today was all about Ding Junhui, as the provisional world number one raced to an early 3-0 lead against the current number one and in truth, rarely looked back.

There was a record 93rd century break of the season from Neil Robertson, remarkably his first of the tournament as he closed to 2-6, but as he lost the next frame on the colours, any realistic hopes of a comeback effectively went with it.

Having played so much snooker during the first half of the season, winning in China (twice) and India, I had wondered whether we might have seen the best of Ding this season, but further victories this year in Germany and now again in China have only served to reaffirm his status as one of the men to beat. 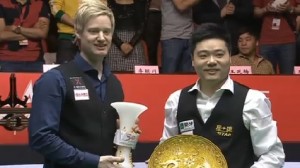 With his win today, he equals Stephen Hendry’s record of five ranking event titles in a single season set back in 1990/1, with the chance to go one better if he can lift the world title at the Crucible for the first time next month.

Time will tell on that front, but in the meantime he moves some £70,000 clear of Robertson in the battle to become the first world number one under the new money-list, which comes into effect at the end of the season. There is a lot of money still to be won at the Crucible, but already we can see that the Australian will need to reach at least the final if he is to stand a chance of beginning next season at the head of the rankings.

On the subject of Robertson, though he could not win today, given the illness which has plagued him throughout the tournament to date, he declared his run this week of of his best achievements earlier on Twitter.

No doubt he will not be displeased to see his first match in Sheffield not take place until five days in on the Wednesday, giving him a little extra recovery time before the big one.

Elsewhere this week in Beijing, the main story has undoubtedly been the fairytale run of Mike Dunn to his first career ranking event semi-final, in the process earning himself £21,000 and securing his place on the main tour for at least another season. 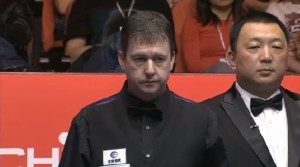 Having stayed on in China for a month, encompassing the Haikou World Open and China Open, Mike’s commitment cannot be questioned and clearly it is a tactic that has paid dividends for him. Having survived falling 4-1 down to Peter Lines, eventually coming through 5-4 on the black, as the tournament progressed, I fancied Mike to win each match up to the quarter-finals, but I did not see him defeating Mark Selby.

Though he would readily admit that nerves got the better of him against eventual champion Ding, the loss takes nothing away from his efforts this week, which have been well received by his fellow professionals on social networks such as Twitter.

Mike aside, there was a welcome semi-final run from Ali Carter, while Graeme Dott also continued his quiet renaissance this season. There were two massive victories for Jimmy White against David Morris and Alfie Burden to give his tour survival prospects a huge boost, while Thepchaiya Un-Nooh, Tian Pengfei and Luca Brecel were also winners around the top 64 bracket.

But now the China Open is at an end and the build-up to the World Championship can begin in earnest. Already this weekend I have blogged about the upcoming Crucible qualifiers, as well as the latest position in the battle for tour survival. You can also view the schedule for the venue stages of the World Championship here.