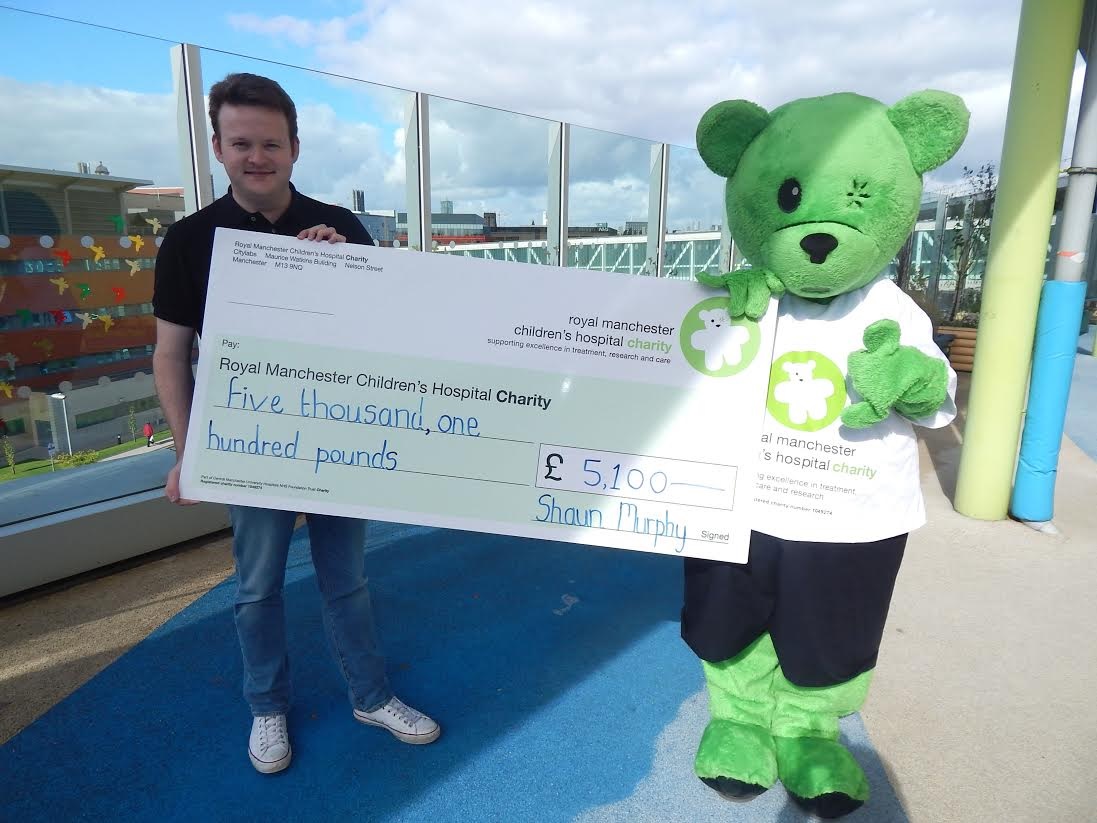 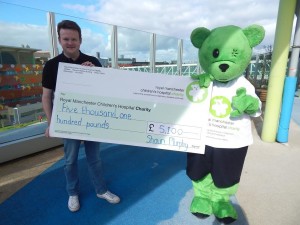 Charity patron Shaun is a regular visitor to the hospital, donating £100 every time he makes a break of 100 or more in a competitive match. His latest donation covers the number of centuries that he made during a successful 2014-15 season that saw him land three titles.

His most prestigious success came in January this year when he landed the Masters title at Alexandra Palace. In doing so, he became only the 10th player in history to capture’s snooker’s coveted Triple Crown – the World Championship, UK Championship and Masters. The latest victory saw him proudly wearing the Charity’s logo on his waistcoat.

Accepting the donation on behalf of the Charity was mascot, Humphrey bear. Shaun was excited to hear all about the Charity’s new fundraising appeal which launched earlier this week. The Helipad Appeal aims to raise £3.9 million to build a designated helicopter landing pad on location at the central Manchester site. This is the fourth season which Shaun has raised funds for Royal Manchester Children’s Hospital, the largest children’s hospital in the country.

‘The Magician’, as he is known to many of his fans, has now raised over £12,000 with his ‘£100 per 100-break’ initiative. Shaun, 33, is a long-time supporter of Royal Manchester Children’s Hospital, first becoming involved with the charity as a result of on-going treatment for his second cousin Maisie.

Shaun, who has just returned from Shanghai said:

“Last season was a memorable one in many ways for me, not least because I made 51 centuries – the most I have recorded during a one-year schedule. That was satisfying as it means I have been able to raise more money for RMCH Charity than in any of our previous seasons.

“That said, I am more determined than ever to keep raising the bar and smash that ‘PB’ of 51 centuries over the coming nine months. That will mean I have enjoyed success on the table and ensure that more funds can be raised for RMCH Charity.

“It is a charity that will always matter to me and I remain so impressed by the amazing work that it continues to do in and around the Royal Manchester Children’s Hospital.”

“We are so proud to call Shaun a patron of our Charity; his continued generosity helps us in making it better for every child, every day. Our supporters love seeing Shaun in the spotlight, wearing Humphrey upon his waistcoat. We cannot thank him enough for his support.”

Royal Manchester Children’s Hospital Charity is raising money to ensure continued excellence in treatment, care and research at the hospital – improving the lives of thousands of children each year across the North West and beyond.

The support of the Charity means that the hospital can provide additional resources that make life easier for patients and their families who use the hospital.

The charity has three main areas of work: