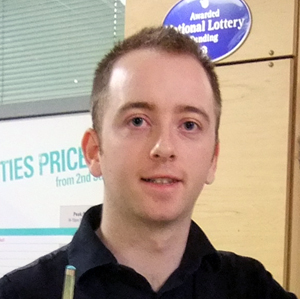 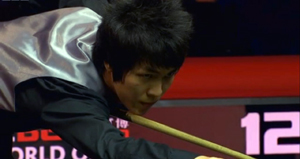 Following Neil Robertson’s victory at the UK Championship, the snooker circuit was back in action this week at the Barnsley Metrodome for the final matches of 2013, as the round of 128 of the German Masters and Haikou World Open events were played out.

With so many matches played this week in both events, it is difficult to know where exactly to begin, but perhaps the stand-out moments were the maximum breaks made by Dechawat Poomjaeng and Gary Wilson, making it three in the space of a week following Mark Selby’s £59,000 break at the Barbican Centre.

Though the money might not be the same (£2,500 to split between them), the achievement represents the first 147 for both and no doubt will have been special moments for Dechawat and Gary.

In terms of results, it was a mixed week for both, as they each went on to follow up their maximum breaks with victories in the German Masters qualifiers, but both lost out days later in the Haikou World Open event. Gary in particular was to be involved in a close encounter with David Gilbert, eventually losing out in a decider. Apparently Dechawat lost the fifth frame of his match with Barry Pinches on Friday after he again fell foul of the ‘three misses’ rule, which caught him out earlier this year at the Crucible Theatre.

As seems to be increasingly common as the season progresses, there were few upsets of the higher ranked players in the first round of these flat draw events. Ricky Walden was the be the highest ranked player to lose out in the German Masters qualifiers, finding himself of the wrong end of Wilson’s 147, while Robert Milkins found himself on the wrong end of a whitewash to the rapidly improving Joel Walker.

Without doubt the biggest surprise of the event however was the defeat of 2011 champion Ronnie O’Sullivan, who lost out 5-4 to Thepchaiya Un-Nooh on Thursday evening. More surprising than the result however, was the manner of O’Sullivan’s performance, selected highlights of which you can watch here. 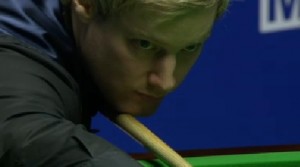 One man who was to have no such trouble was Australia’s Neil Robertson, who hit another two century breaks in qualifying for both tournaments, taking his season tally to 60. This means that at the season’s halfway point, the world number one needs just one further ton to equal the all-time record, set last season by Judd Trump. Can he make a century of centuries? I think that feat might be just out of reach, but he will no doubt set a new benchmark which will take some topping.

There were also to be big victories for legendary duo Steve Davis and Jimmy White, who both needed results in order to boost their ongoing attempts to stay on tour for next season. For Steve, the events came just days after he returned from Australia and his spell in the jungle, while Jimmy won a nerve-wracking decider against Vinnie Calabrese in his first match, to give his hopes a much needed boost. A more detailed look at the race for tour survival will follow in the coming days.

Further down the rankings, there were three players ranked outside of the top 64 who were able to win both of their matches, Thai duo Thepchaiya Un-Nooh and Noppon Saengkham, as well as Ireland’s David Morris. For David, his victories against Rory McLeod and Peter Ebdon mean than already having started on £0 on the provisional money list, he finds himself up inside the top 64 and well placed to climb higher. 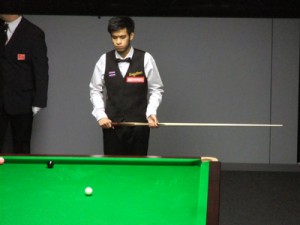 With those victories for Un-Nooh and Saengkham, as well as wins for Ratchyothin Yotharuk and Dechawat Poomjaeng’s 147, it has been a strong week for Thailand’s players, although James Wattana was lose out to improving Scotsman Michael Leslie in his World Open match.

The final match to finish yesterday was that between Jamie Jones and Jamie O’Neill, which saw the former gain an important deciding frame victory to book his place at the venue. With it, Jones also concluded the final professional match of 2013, bringing to an end one of the busiest year’s snooker has ever seen.

Of course there is much still to come here at PSB, including the usual end of season awards and review pieces, as well as an updated look at the all-important battle for tour places next season and my six monthly update of the player profiles on the blog.